Abstract  Aim: Extracts from Ephedra species have been reported to be effective as antidiabetics. A previous in silico study predicted that ephedrine and five ephedrine derivatives could contribute to the described antidiabetic effect of Ephedra extracts by inhibiting dipeptidyl peptidase IV (DPP-IV). Finding selective DPP-IV inhibitors is a current therapeutic strategy for Type 2 diabetes mellitus management. Therefore, the main aim of this work is to experimentally determine whether these alkaloids are DPP-IV inhibitors. Materials & methods: The DPP-IV inhibition of Ephedra's alkaloids was determined via a competitive-binding assay. Then, computational analyses were used in order to find out the protein-ligand interactions and to perform a lead optimization. Results: Our results show that all six molecules are DPP-IV inhibitors, with IC50 ranging from 124 μM for ephedrine to 28 mM for N-methylpseudoephedrine. Conclusion: Further computational analysis shows how Ephedra's alkaloids could be used as promising lead molecules for designing more potent and selective DPP-IV inhibitors. 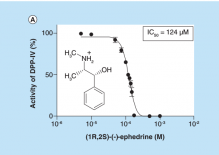