Matrix metalloproteinases (MMPs) are the family of proteases that are mainly responsible for degrading extracellular matrix (ECM) components. In the skin, the overexpression of MMPs as a result of ultraviolet radiation triggers an imbalance in the ECM turnover in a process called photoaging, which ultimately results in skin wrinkling and premature skin ageing. Therefore, the inhibition of different enzymes of the MMP family at a topical level could have positive implications for photoaging. Considering that the MMP catalytic region is mostly conserved across different enzymes of the MMP family, in this study we aimed to design a virtual screening (VS) workflow to identify broad-spectrum MMP inhibitors that can be used to delay the development of photoaging. Our in silico approach was validated in vitro with 20 VS hits from the Specs library that were not only structurally different from one another but also from known MMP inhibitors. In this bioactivity assay, 18 of the 20 compounds inhibit at least one of the assayed MMPs at 100 μM (with 5 of them showing around 50% inhibition in all the tested MMPs at this concentration). Finally, this VS was used to identify natural products that have the potential to act as broad-spectrum MMP inhibitors and be used as a treatment for photoaging. 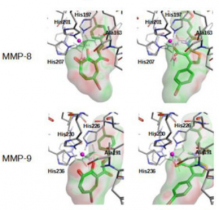